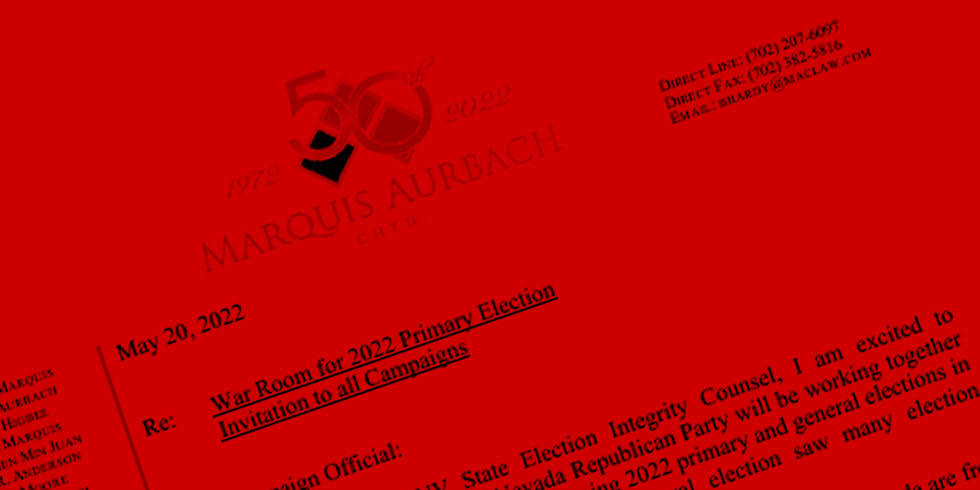 As the RNC’s NV State Election Integrity Counsel, I am excited to announce that the RNC and the Nevada Republican Party will be working together on election integrity efforts for the upcoming 2022 primary and general elections in Nevada.

As you likely know, the 2020 general election saw many election integrity-related issues in Nevada.

In order to combat these issues and ensure that elections in Nevada are free, fair, and transparent, the RNC and NV GOP will be setting up a joint “war room’ operation in Las Vegas to act as the central clearinghouse for identifying and respondine to election integrity issues. In order to ensure a seamless general clection operation, we will be using the upcoming primary election as a “dry run” for our new joint operation. To that end, we are contacting every GOP campaign and strongly encouraging them to send at least one representative to be present in the war room, who will work at the direction of the joint RNC-NV GOP operation.

Part of our new strategy for addressing election integrity issues is to use each campaign as our “eyes and ears” on the ground. As such, we hope that each campaign will send at least one representative to participate in our war room operations. These representatives will be essential to relaying any election integrity issues identified by their respective campaigns and quickly resolving any disputes as they arise.

Should you want to learn more about our war room operations. or designate your campaign’s representative, please, no later than Fri. May 27th contact the undersigned (bhardy@maclaw.com / 702-382-0711) or Alex Watson (awatson@gop.com / 714-887-9698), who serves as the NC’s Election Integrity Director for Nevada.