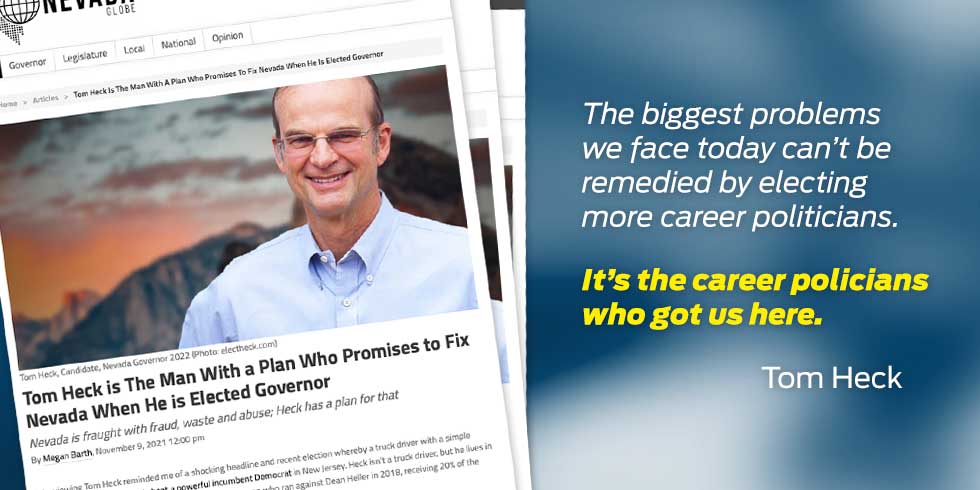 Nevada is fraught with fraud, waste and abuse; Heck has a plan for that

Interviewing Tom Heck reminded me of a shocking headline and recent election whereby a truck driver with a simple message and 10k in the bank, beat a powerful incumbent Democrat in New Jersey. Heck isn’t a truck driver, but he lives in Reno as a registered Republican and is an Air Force veteran who ran against Dean Heller in 2018, receiving 20% of the vote.

Heck is running against Dean Heller again, but this time in the gubernatorial primary and is confident he will unseat Governor Steve Sisolak. With his business approach to solving problems and tackling inefficiencies, Heck believes that Nevadans are tired of politicians like Heller and Sisolak, and ready to elect someone like him to fix the mess created by politicians.

Heck served in the Air Force for 23 years, ran logistics for the ballistic program “Star Wars” under Ronald Reagan, and has three graduate degrees. Heck explained that throughout his years of service and career, he was continually approached to fix problems. “When no one else could fix problems,” Heck said, “they came to me.” This earned him the nickname, “the man with a plan.” The plan Heck has for Nevada is called “The Nevada Lucky 13.”

Heck has a passion for fixing education as Nevada continues to rank last or near the bottom of national testing averages. Heck told The Globe, “Over the last eight years, the state of Nevada has increased education funding by 40% yet remains dead last in the nation. Education doesn’t have a funding problem, it has an accountability problem.”

In fact, Heck wanted The Globe to share his phone number with Nevadans who want to talk to him and meet him. You can reach him at 775-393-0500. He promises to pick up the phone and listen.

Heck proposes to delineate students by their learning ability as mixing students of various learning abilities is not producing successful outcomes or preparing them for their future. Through delineation and summer school for those who fall behind, Heck believes the teacher can then focus on improving a student’s ability to learn and excel. His father was a vice-principal and was responsible for disciplining and removing disruptive students. Heck stated, “Teachers should not be disciplinarians” and should not be responsible for the removal of disruptive students.

Heck promises a systems approach to education, one in which, as Governor, he will ask districts to provide plans to increase their scholastic rankings. If there are districts or schools that fail to improve, Heck will withhold funds until improvements are made. Heck also proposes a dual track for students, one which would provide both vocational schools and college preparatory courses so guidance counselors could assess and steer students onto the right track to meet their personal and career goals.

Heck also believes that parents need to have school vouchers whereby the money follows the student. If too many parents leave a school that is not performing, Heck said, the school would be shut down and reopened with new staff. Heck reiterated that a systems-based approach is the type of accountability, competition, and choice that is missing in the current and failing educational system.

When asked about diversifying Nevada’s economy to provide additional revenue streams, Heck repeated that the problems in Nevada, including the school system, are not a problem of revenue, but of accountability.

Heck used a conversation he had with a Nevada legislator to illustrate his point: “How do you review programs to determine whether they are effective or ineffective and canceled or included in the budget process?” Heck asked. The politician looked shocked and replied, “We don’t do that, we just determine how much we are going to increase the budget/program every year.”

“In order to increase a budget, you have to increase taxes and revenues every year. The Nevada state government could take a 20% cut and efficiency would go up. Nevada is fraught with fraud, waste, and abuse. It’s about using the money we have like a business and that is what Nevada needs, a business approach to funding things. I have no problem taking away or removing a program if it’s not working.”

Heck is an advocate for a zero tax basis on business as businesses already pay the taxes Nevadans pay: property, federal, sales, and businesses will stimulate the economy by building facilities and hiring workers. “The problem is that politicians think taxing business is the way to do it, but it is a pass-through for business,” Heck said.

When asked how he differentiates himself between a Sandoval Republican and Sisolak Democrat, Heck didn’t hold back:

“Sandoval wasn’t a Republican. He was a Democrat hiding behind Republican money and politicians. Governor Sandoval changed the margin tax to the commerce tax after a majority of Nevadans voted against the margin tax. With this name change, he and his Republicans in the legislature passed the largest tax increase in state history. Republicans weren’t happy with Sandoval. All but maybe one of those Republicans who raised taxes were voted out. I am a conservative. I am a businessman who works on issues and finds common-sense solutions and outcomes. I have a unique ability to get things done and for making lives better for Nevadans.”

Heck brandished Sisolak as a doctor practicing medicine without a license and said he should be criminally prosecuted for doing so, in that he denied Nevadans and doctors the ability to receive and prescribe medication during a pandemic.

“If you look at Sisolak, he was a commissioner, but in my career over 40 years, I have a much broader breadth of experience and was always the go-to guy to get things done. What Sisolak has done during the pandemic is criminal. Masks are a political mandate. Day one as the Nevada Governor, I will remove masks and vaccine mandates. I will put the best information out to the public so the public can decide what is best for themselves.” Heck added: ” I will never come between a doctor and a patient.”

Heck said that Nevadans, especially Independents, are angry about the mandates, masks, and shutdowns. “The anger is intense,” Heck said, “and Independents are fed up with the loss of freedom and Sisolak’s dictatorial mandates.” Nevada is “not a blue state” and due to this intense anger, Heck believes that Sisolak is very vulnerable and easy to beat.

When asked about resources and funding to beat Sisolak, Heck again referred to his successful business approach of finding solutions that were sometimes “out of the box.” He also referenced the truck driver in New Jersey, Edward Durr, who raised little money but won a big election. “With us military guys, it’s about being given a mission and completing the mission, and I am going to be the Nevada Governor. The Governor is responsible to service the people and not making excuses why that can’t be done. When the unemployment system failed during the shutdown, the governor made excuses. I come from a time that if a computer went down, you picked up a pencil to get things done. I would have done whatever it took to help those families in need. I will spend about 10 times what I spent on my Senate race and I know that is not a standard approach, but that is what I have always done in business and I have been successful. I am not going to be the same old politician.”